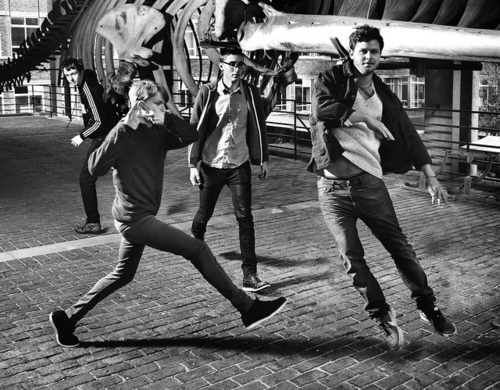 As we enter the fourth and final quarter of the year, with the Mercury Price nominees about to be unveiled and the hypest media with a rough draft of their top acts of the year on their iPads, Alt-J become something like The XX two summers ago but actually better. Mystic Pitchfork has not even mention them yet, even though they’re clearly the Mercury Prize favourites.

ROCKAST already talked about their brilliant debut An Awesome Wave some time ago. It’s one of the albums of the year so far if not the best, and we have had the chance to talk with Thom Green about the album, their gigs, books, music or internet:

1. First of all, a question many people keep asking… Why Alt-J? Who got the idea for the name of the band after that coincidence with The Films?

Looks cool, sounds cool, that’s literally it. We don’t have any deep connection with the name it’s just something we all agreed upon.

2. You mention Radiohead as one of your musical influence, but your music seems to establish some links with cinematographic aesthetic. Would you like to make a soundtrack at some point? What would it be your ideal director or kind of movie?

We would love to make a soundtrack. We quite like the film Koyaanisqatsi, something like that would be great to write music to. We’re quite open to new ideas and it wouldn’t matter about what the genre of film was just as long as it was interesting and well made

3. For the Breezeblocks video, you got in touch with the producer you most liked when entering your own briefs in the Radar Music website. How do you get on with the internet? Is this open way of collaboration something you enjoyed and would like to repeat more often, let’s say, in new videos or other ideas you may have?

4. Flitzpleasure it’s based on a character from Hubert Selby Jr’s book Last Exit to Brooklyn. What was the last book you read? Do you intentionally try to read books that somehow contribute to inspire a song?

The last book I read was The Hunger Games. I really liked it, so enjoyable and easy to read. Joe draws a lot of inspiration from books but I don’t think he deliberately reads in research for material, it’s just what naturally inspires him.

5. First time I listened An Awesome Wave I was fully impressed as it’s one of the very best records I’ve heard in years. But then I thought about how your concerts would be. For anyone like me who hasn’t been on any of your concerts yet, what can we expect from them?

Thank you! We’ve been playing a lot this summer and we’ve managed to become a lot more comfortable on stage playing the album. We don’t ever use samples, backing tracks or triggers, everything you hear is played live which was tricky to learn but we believe it gives the audience a far more authentic experience of us as musicians playing our album. We’ve been told it sounds just like the album which is great.

6. I’ve seen you like to have choirs singing onstage with you, is it something you’d like to have on your gigs?

I don’t think we’d do it for every show otherwise it would become an average experience but we definitely intend to have a choir at certain special shows. It’s a great thing to be able to do.

7. Which additional instruments you reckon you could use for upcoming albums?

We never go out of our way to find new instruments, we’re happy with what we have but if there is a certain sound that we desire we might have to source out an instrument we’ve not used before like maybe a different keyboard or percussion.

8. What’s the writing process like?  How does the band approach a song? Do you all pretty much build the song up from scratch together?

Most of the time Joe will write the base of a track on his acoustic guitar and then bring it to the rest of us and we build upon it from there. We’re quite democratic in that we leave our egos aside and only put in or take away things that are necessary, we never compromise a track or part of a track. It can take months to write a track sometimes, we won’t be happy until we know it’s finished.

9. Would you like to have any specific person or band collaborating with you?

We all have very different musical influences so it’s hard to say but Mountain Man sang for us recently which was amazing, maybe doing something with Hot Chip or even a hip hop producer would be cool.

10. How do you get on with the fame? Do you feel uncomfortable?

We keep our heads down and don’t let it effect us too much. You do get used to it quite quickly and you know how to react. It’s very flattering having attention for our music, we’re very lucky. It’s pretty crazy when we go to a country for the first time and we already have fans though.

11. What music are you listening right now?

Very, we’re in a great place in our career and we’re all very excited to see where we end up next.

An Awesome Wave has been released on May 25th by Infectious Music / Pias.

Thanks to [PIAS] Spain