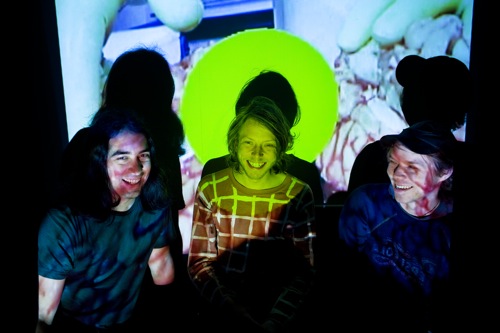 Whenever we’ve talked about noise, we never really talked about this side of noise. Black Dice have been in the New York noise scene since 1997. In that time they have released 6 studio albums and plenty EP’s and singles. They got really good reviews from Pitchfork, the so-called music bible, and they’re in Spain to present their new album, which is called Mr Impossible.
We bring you this interview with vocalist Eric Copeland where he talks about music, Brooklyn or critics.

How was Mr Impossible conceived after the move from Animal Collective’s label Paw Tracks to Domino’s Ribbon’s Music? Did you find any difference?

We worked on Mr Impossible without a label in mind. The writing and recordings were organized and financed by the band, so there was no real difference in our M.O. We didn’t leave Paw Tracks with any bad feelings. Just trying something new out with Ribbon. In our experience, all labels are pretty much the same at the end of the day.

I heard that you try not to listen too much music in order not to get influenced or compared with what you’re listening to. Is that true?

No, we listen to a lot of music, but we don’t try to mimic or rip anyone off. I don’t know if we could, if we wanted to anyways (copy other musicians). But we all just listen pretty casually to whatever is available from the radio to the internet to our specific tastes…

What’s the story or the concept behind the Rodriguez video clip?

No concept, just working on making something that we like, that keeps moving, that feels new to our eyes. It’s similar to making music. We don’t live in isolation. I hope our music and videos males it out there in a similar way, where people hear/see it as part of the larger conversation and not an anomaly in some sort of ghuetto…

How is your pedals collection going? Do you have a favorite one? Have you create one of your own or are you planning to do so? Like “A Place To Bury Strangers” did?

We are poor men who play on old equipment. There’s no fetishizing of gear. We use what we need, and it’s all pretty basic.  Myself, I’m trying to dumb down my gear rather than build it up! I imagine we’d love to design a pedal to do everything we want. But I don’t foresee that happening soon…unless someone came to help us out?

You’ve been tagged as noise rock, psychedelic electronic… which tag suits you better?

Neither. I have no relationship really to either tag. We make what we like, and then a journalist puts it into a category to help a reader understand what it is. But neither place feels like home. Or feels accurate…

You had good critics with specialized media but also lots of detractors. Do you give them great importance?

I don’t think I saw more than one or two reviews of Mr Impossible. For the most part, the last 17 years has felt like the same relationship with music journalism, where some will like it and many will criticize. If it mattered a lot, we wouldn’t still be here doing what we want. And most journalists won’t last as long we have anyways, so no, no importance.

As Brooklyn neighbors, what’s the most exciting new stuff you have listened there?

Speaking for myself, I like Prince Rama live. They’re from NY. I like a band from Boston called The Needy Visions. I like Dj Dogg Dick, who just moved up to Brooklyn from Baltimore… but honestly, none of us are very up on music from Brooklyn right now. Just some older acts.

For people who have not been on any of your gigs yet, what would you tell them? What can they expect?

I have no idea how to answer this question: Sum up your life in a few words… They can expect us to show up and play our music the best we can…

Is it going to be a lot of impromptu on your gigs in Spain?

There’s always some looseness and improvising, but we are playing songs from Mr. impossible, so hopefully it will be familiar to fans, but more than just the sum of the parts.

We don’t use computers. For the most part, a lot of what we could have been made in the 50’s. Obviously a lot has changed to make our sounds less abstract, but not a lot is based on modern technology really. I say this, and then I realize we benefit from multitracking, bassamplifiers, microchip technology… So in relation to that, I think we could explore similar ideas with a more Rock & Roll vocabulary, like 70 years ago.

I’m sick right now. And tired, so immediately, there’s more on my mind than being happy. And there’s always more work to do, more responsibilities, things to improve… The news is always depressing. The state of the country feels out of control. So happiness I guess is the goal, all the time, but not always the status quo…