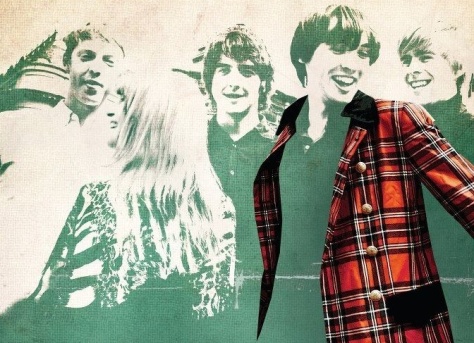 Meilyr Jones is the charismatic leader of Race Horses, a young Welsh band that are here to stay. They’ve just released their second album, called Furniture, that has gathered rave reviews in the press. A truly great album with songs that’ll remind you the likes of Orange Juice, Richard Hawley, Smiths,  or Squeeze.

Meilyr is an atypical guy with a special karma. He talks with us while sitting on the ground and he pauses when he talks. The band is supporting Bat For Lashes on their european leg. Last nite they had a hectic day in Barcelona as the venue they were playing at got closed the very same day. In a venue nearby Meilyr and his colleagues had managed to perform an intimate acoustic set  in the middle of the audience.

Despite all the fuss, they got to Madrid full of enthusiasm and willing to make a good show, without even thinking about the long travel to Paris they had the do following day on their van.

ROCKAST: How is it to tour with Bat For Lashes? How did this opportunity come up?

MEILYR JONES: Amazing! You know, it’s our first time in Europe, and they’re lovely, they’ve been really kind to us. Is amazing playing night after night, meeting people, and see good reactions. It’s a really great experience for us.  The record company liked it and asked us to support them.

You’ve also toured with bands like British Sea Power or Fanfarlo, is it a good chance to learn from them?

Yeah, really a lot. I think you learn from what you like, and what they do on you, and also from what you feel, so for us, live is really important, it is very physical, has a lot of energy, more than anything. We try to keep it differently, rather than just doing the same thing.

Furniture has been very well received with great critics in the press. You must be proud of it I guess.

We’re really happy with it, I mean, we recorded it very quick and we put a lot into it so it means a lot to us, so it’s nice.  And we’re very excited that people come to the gigs, like our music and are listening to the music and enjoying the record.

What’s the difference between Goodbye Falkenberg and Furniture?

With Goodbye Falkenberg we were still kind of, experimenting, hearing new songs and discovering new bands like, new music every 2 weeks, and then we would write a song with that in our mind, so it was more like a collage really, just pure experimentation. So we almost see it like this is our first record, in terms of having a strong idea and a strong feeling, while Goodbye Falkenberg was quite wild.

“Some people like quite clinical music, but for me, the human side is the most important thing”

Do you write all the stuff together?

Well I write most, I write the words, and then we make the arrangements.

You were a trio and now you’re a 5-piece band, has that changed the band philosophy somehow?

Yes it does. The group has changed a lot and you just got to go with what it is you know? Having Mali on the band, who has a classical background, has changed things as well. But we kind of wanted to get away from just guitars and have less limits.

You’re not singing in Welsh in this album, is that for good?

No it’s not. At that time I was living in London and my girlfriend at that time spoke only English, and all the films I was watching were either European or English, so our culture was mainly English so… Well I live in Wales at the moment so maybe our next record could be all in Welsh I don’t know…

Meylir, you dressed up in a suit to sing My Year Abroad, and got naked to do some vocals as well… Seems like a very radical way of inspiration, isn’t it?

(laughs) Well I think everything, down to haircut, down to diet or down to sleep or anything, influence what you make and your mood. And I wanted to experiment with getting into different kinds of mind, and I love how I feel like a different kind of person.

“When you make music, you put yourself in a position of extremes”

Lots of bands nowadays are playing very similar music, with lots of samplers and synthesisers. But you’re going the opposite way. How does it feel?

It’s interesting because I was having a chat about it last night with the band that does all the music for Natasha and Bat For Lashes, and I think some people like quite clinical music, but for me I think the human side is the most important thing. Even we have maybe 2 songs where there’s a sequencer going through, and even that is difficult because when you’ve got this music you’ve got to stick to it, you know like a backing track, you can’t change from night to night, and I think when you’re playing live, the reactions change every night. So for us is important that human aspect in music.

Is music losing the romanticism?

That’s really interesting. I do think that’s true. Or at least I think the people are less radical now. Or maybe is that music of the 50’s or 60’s was more of a rebellious thing. Then people started to make money from it, and maybe the people who were so radical thought “I could sound like this and make some money”… I think is true. Behaviour, generally, in society is not that radical as well. So I think romanticism is really important to me anyway.

What are your main influences?

I think, a lot of classical music. But also The Velvet Underground, and Dexys Midnight Runners is a massive influence as well. But also a lot of films

What are your plans for next year?

I would like to tour as much as we can, return to the UK with the band and then, I hope they want us to come back. I think we’re going to do a lot of festivals next year.

Emm… that’s a really good question. (thinks for 10 seconds). No. Well, that’s a really difficult question. Sometimes, and sometimes not. I think maybe to do music or to make things, you’re generally addicted to, you put yourself in a position of extremes. So it’s probably not the most senseful way to live really. Because there’s no grounding. I don’t really have a home. I’m always travelling from city to city and then I go back home and I rest but is not a stable life. And is dangerous to have those extremes. So I would say maybe I’m not happy at the moment, but I’m optimistic, always optimistic, in certain way. So there will be a time where I’ll be very happy soon. Is strange, because what I hate about music industry is that questions like that are not answered honestly. Because there’s always this idea that you have to say that you’re happy and that you love everything.