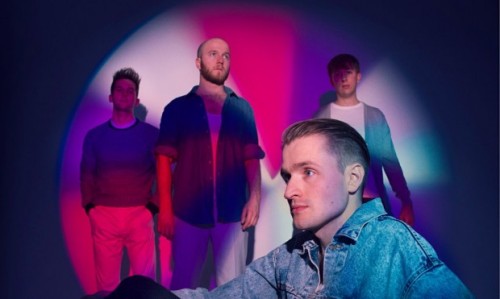 It’s a fact. They’ve become one of the most respected and talented bands in the UK nowadays. Not only the fans but the critics are on their side, and they seemed to be in a very sweet moment in their careers. Wild Beasts have released «Present Tense» (Domino/PIAS, 2014) this year, which is the fourth album for the british musicians. They’re in Spain to present the album in Madrid and Barcelona this month, and we don’t want to miss the opportunity to talk to them.

We had the chance to talk to Ben Little, who plays guitar and keyboards, and who also co-founded the band with Hayden Thorpe 10 years ago. He speaks clear about the life of the band, their music or their future plans.

Yeah, good. I’m in London at the moment, we’ve just come back off tour, we were in Bergen for a couple of weekends. It’s been nice doing festivals every weekend now and just sometimes you know, fly in and fly out.  Festivals are good, you know, they give you a break from the touring, you know the travel time  period and you’re just doing it every weekend, so it’s quite, it’s quite relaxing to be honest.

You’ve been together now for 12 years, which is a considerable time nowadays.

You know, when we started out, we were young kids doing it for a hobby and it fast became something to really put a lot of effort into, and a lot of time went into it.  You know, at first we were rehearsing once a week.  Just me and Hayden, I’d just go around to his house, we’d play guitar together for a while and then by the time we were like 16, 17, we were renting out a tiny little room which only cost us like 50 pounds a month or something ridiculously cheap.  Which I can’t believe now but we had this little room and we’d go there pretty much every night and Chris the drummer has come down, and that’s where it started getting serious.  And I think when that happened, we always sort of knew that, that’s what we wanted to do, and I guess we’ve never looked back since then really.  I guess after 10 years have passed, you know we’ve been doing it for the whole of our life.  It’s somewhat strange that we’ve been doing it for 10 years but it’s not like we’ve got a lot to prove and you know we’ve got a lot of work to do, so it’s just you know the four of us are always wanting to keep making music together I guess.  We’re on our fourth record now and we’re looking towards the fifth already.

Would you think that the fact of being loyal to your style since the beginning has been the key to get where you are now?

I don’t know how successful we are, we’re still trying out best to – you talk about being successful, I guess we still feel like it’s very much hand to mouth and what we do is, it doesn’t make us a lot of money or anything should you know that but I guess the success that we do have is that we get to keep making music together.  I think the secret is probably just wanting to be making the music you want.  Once we finished touring with Smother, when we went into the studio, then we realised that oh this is what we’re actually doing it for.  Being in the studio, we actually really enjoy it and it’s almost like a compulsion to want to make the best record we can and I think the secret is just enjoying it and getting better.

How did you approach “Present Tense” and what are the feelings after releasing the new album?

We toured Smother for a long time, and it was almost quite a down album really.  You know, it’s quite soft in a way.  And after touring that, we realised like, we’re doing these festival spots and doing bigger shows and bigger shows, and we thought we needed songs to fit the show that we were doing.  It was almost that we all sort of listened to music that was a lower tempo and that bus driving.  And I guess when we were writing, that’s where it started along and when it came out, I guess it began to pick up and it feels really good now.   It feels like people are getting it and having the benefit of having 4 albums out, it’s rare what people ask what we’re getting as well.  Because when the first record came out, people just didn’t know what to make of it.

«What we do doesn’t make us a lot of money»

Was there something you wanted to prove yourselves, something that you didn’t try in other albums?

I mean with a song like «Beautiful Truth”, we wanted to make a track that was, you know, undeniable, like a proper pop song that didn’t hold back. But I think we sort of achieved that, it’s like a song that’s light on it’s feet and yeah we just wanted that sort of like undeniable groove that you get from a song.  And so that was something new that we’ve done because usually you know, you’d go just mainstream and something like that steer away from it because we’re scared that, you know, whole knock something out, but you know dancing in the mainstream is a dangerous thing.  And with this one we didn’t make specifically to be true, we wanted to make, you know, a proper pop song. And I’m sure it’s not like a pop song that will be played on the radio, not sure if it is a pop song.

You got to cover Milley Cyrus’s Wrecking Ball, will we ever see you making that kind of pop song?

I think what we do, whatever comes out, it sounds like Wild Beasts, you know?  It’s Hayden and Fleming singing and it’s inevitably us. You know, my voice is sort of almost dictates the, where the song’s going to be perceived I guess because maybe you know, Hayden’s voice maybe couldn’t succeed as a pop voice, you know.  So maybe we would try to, like you know write songs like that.  I mean, that’s a great, great track, you know the level of production and the song writing, you know.  Something that interests us all I think it’s like a ghostwriters guide.  You know it’s quite slick in the rhythm, you’ve got a big team and a lot of money to put into it to make this perfect song but you know they’re paying for it.  The artist, the resources that they hire, the money that we can stretch for our investment to make these sort of songs.  But you know, also we’re not like massive huge fans of Miley Cyrus or anything.  It’s just an interesting prospect to cover a song like that.

And on the other side, what’s that thing you’ve thought that you could try to make it in a record but haven’t done it yet?

I mean, it’s strange ‘cause I think once you tour, tour an album, when you get to the end of a touring cycle that’s when the chaps can answer the question, because you know some of the experiences that happened and what worked out great and properly yeah.  So you know, you’re on a different head space when you get to that point but in terms of trying something new, we always try, try not to repeat ourselves but in terms of the exact thing, I’m not sure.  Like I mean we’re always changing you know, we’ve cracked all that we use each others scribble in songs and I’m sure by the time we get to write the next album, we’ll be listening to you know different sorts of rhythms than we do now, so I’m not sure really.  I think you’re mainly influenced by what you’re listening to and like I said before we’ve sort of got to sound like Wild Beasts because more songs get together in a room it no matter how lucky you are or how poppy a track sounds.

Would you like an album to be more focused on the guitars rather than in laptops and shynts or are you comfortable with that?

I play guitar and keys and at the start of this record, I was very interested in the production side of things and you know we started on laptops and that’s where the idea sort of, sort of grew from and personally you know I’m very interested in the production side of it, very interested in marrying my own techniques, you know like a band in a room sort of sound with you know, use of like software, plugins, synthesizers, you know, modulars.  It’s all very interesting, they’re all tools to help us make songs.  So personally, you know I started out on guitars then the more we’ve gone on, sort of moved into a room where I’m sitting on a computer all day or during a gig or, it’s a playing a card.  You know, it’s something that you can use to make music.

If “Present Tense” had to be a journey, which places would you think it would visit?

Maybe it would start where we’re all from.  Then travel down to Manchester where we all do the gigs you know in the early days and we’d get on a plane at Manchester Airport and fly to maybe Istanbul.  We like Istanbul a lot.  The people there are amazing and they were just great, they all seem to like it when we go there but like a round the world trip, we could maybe stop off in Spain.

We always liken it to being in London, like having taken homage for a while, and it’s quite an intense period and then say if you’re like on a train from London back up to Lake District, you know it’s often nice to get out, as soon as you get out of London and you’re seeing some green… and that’s why I like half way through the album it sort of often does, it’s a lot more soft and by the end of the album, you’re like back home, back up north.  So I think we definitely started off where it’s made and that’s in London.

And last question. Are you happy?

Yeah, of course yes, it’s an amazing, amazing thing to be doing, you know in every day life, it’s an amazing job to have when you’re working with your best friends that you grew up with and travelling the world and making music that people enjoy.  So yeah, I mean, there’s a hell of a lot of positives and sometimes you have to pinch yourself and realise that sometimes actually it is great what you’re doing.  Although,  you don’t see reward in say money or you know, you don’t get to see your song sell much, or maybe that, maybe you get down about that but then sometimes you’ve just got to realise that actually what you’re doing is worthwhile and it’s a special teenage thing to do, you know get into trouble with one of your friends and go play music for people that enjoy it and I know that all the guys are always happy right now.